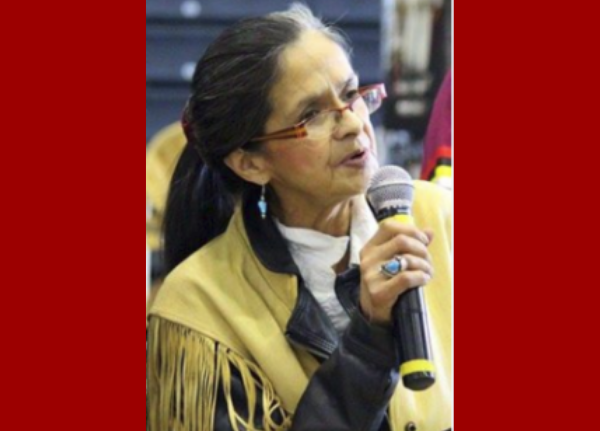 Annie Smith St-Georges is a well-known Algonquin Traditional Elder born and raised on the Kitigan-Zibi reservation near Maniwaki. Daughter of a trapper, she has acquired many teachings from her grandfather, her uncle, the internationally renowned Grand Father William Commanda, and from many aboriginal elders from across North America. Annie’s teachings are based on respecting Mother Earth and all its creatures, on spirituality and on promoting harmony between one other.

Annie was chosen by all National Aboriginal Organizations and the Government of Canada as the Algonquin Elder to perform the Welcoming and Smudging Ceremony for the June 11, 2008 Apology for the Residential School Victims in the presence of the Governor General, the Prime Minister, Opposition Chiefs, The National Aboriginal Organizations’ Chiefs and Representatives, Ministers and Senators, other honorable guests and the public. In 2010, Annie was also chosen as the Algonquin Elder to perform the Opening and Closing Ceremonies for the Re-opening of the Commission on the Residential School Victims at Rideau-Hall.  Annie is also the Home Elder at the National Arts Centre in Ottawa.

Annie is the former owner and founder of the WÀGÉ Health Center which promotes the integration of Aboriginal, Alternative and Scientific medicines through a concept based on the medicine wheel. She continues to work as a traditional healer. She was also instrumental in founding the KUMIK Elder’s Lodge in Gatineau and was the instigator of the federal government’s interdepartmental, annual Aboriginal Awareness Week. Annie holds a teaching certificate from the University of Quebec and has worked for several years as a federal civil servant.

Annie is regularly invited to teach traditional values at all levels of education, from primary school to University. She also sits as an advisor on several national groups including the National Aboriginal Diabetes Association, the International Indigenous HIV Organization, the World Health Organization, and several committees within Health Canada, the Canadian Border Services Agency, Aboriginal Affairs and Northern Development, and the National Aboriginal Women Summit, to name a few.

All sessions by Annie Smith St-Georges

Respecting Traditions: Healthcare for Indigenous peoples in a different lens